Update: Despite bipartisan efforts to reform the EB-5 visa program, Congress has reauthorized the program with no changes through September 2016.

Through the EB-5 visa program, wealthy foreigners can invest $500,000 to $1 million in development projects and in turn, receive green cards for themselves and family members if the investment can be shown to create 10 U.S. jobs. The program is now up for Congressional reauthorization.

Supporters of the program have a basic mantra: “It creates jobs for U.S. workers at no expense to the U.S. taxpayer.”

That’s pretty much what Sen. Patrick Leahy (D-Vt.), eager to attract investment to his state, claimed in a statement.

But claiming that EB-5 investments create jobs at no expense to the taxpayer is bogus. It’s also why an expected compromise regarding reauthorization of EB-5 falls short, despite improvements to the program.

Having covered the EB-5 issue for five years, especially regarding its role in the controversial Atlantic Yards (now known as Pacific Park) real estate project in Brooklyn, I think the program should be stopped in its tracks and fully revamped, not simply tweaked.

The profits at stake prompt deceptive practices — both in marketing investments and claiming job creation — that distort the intent if not the letter of the law.

Regional centers — operations that pool EB-5 money for development projects — earn hefty fees from investors, as high as $50,000 per investment. Regional centers also profit from the spread between the interest they pay immigrant investors and then charge entrepreneurs.

The green card alchemizes profits. Think about it: As long they get green cards, the immigrant investors don’t really care about interest and will take a 1 percent return. Meanwhile, the entrepreneurs getting the loan are eager to pay the regional center 5 to 8 percent as opposed to 12 percent they might have to pay on the open market.

The current legislation may curb some of the worst abuses, but it essentially represents an effort to expand access to the gravy train, rather than stop the train and rethink the program.

Unlike Sen. Dianne Feinstein (D-Calif.) — who by the way, is an outlier in Congress — I don’t think the issue is that “American citizenship is for sale, and that’s not what our country stands for.”

Yes, it’s unseemly that green cards can be acquired so cheaply. And I say cheaply, because remember, investors are not giving up $500,000; they’re just parking it for five years or so, and the major cost is foregone interest and fees. (Some small fraction of people lose their investment and some don’t get their money back on time.)

University of Chicago Law professor Eric Posner calls the price “extraordinarily low.” No wonder the annual quota of 10,000 is oversubscribed. Most investors are Chinese nationals, seeking to get their children educated in the United States.

But allowing the rich to buy access is not unusual. It’s the way we do it.

Many other countries, including Australia and the United Kingdom, offer investor visa programs. But the U.S. has a relatively low minimum investment in comparison and a Rube Goldberg-type program, in which private entities market public assets. Other countries retain more public oversight.

Under the compromise legislation, the minimum investment would rise to $800,000, which is still rather low, and the federal government would have more tools to curb fraud and abuse, of which there have been a number of egregious cases.

The scandal is what’s legal

However, as the saying goes, the scandal is not what’s illegal, it’s what’s legal.

First, EB-5 funding doesn’t necessarily “create jobs.” It might if it’s seed money for projects that otherwise wouldn’t have launched in rural areas or areas of high unemployment. But many investments aren’t that.

The Government Accountability Office this year concluded that the agency overseeing EB-5, the U.S. Citizenship and Immigration Services, could not validly analyze job creation. After all, projects financed through regional centers don’t require a headcount of employees. An economist’s report, which calculates not only direct jobs, but also indirect and induced jobs caused by spending, can suffice. Let’s say that you invest in an apartment construction project: The direct employees are construction workers, while indirect jobs are those workers at factories making the steel. The workers at the deli where the direct and indirect workers get their morning breakfast are induced jobs. That all can get a bit fuzzy.

Indeed, with Atlantic Yards, evidence suggests that a portion of the first round of $228 million in EB-5 financing was used to replace a high-interest land loan. Meanwhile, potential immigrant investors, wooed at flashy investment seminars featuring retired basketball stars like Darryl “Chocolate Thunder” Dawkins, were told they were putting money into the Barclays Center arena — which was already funded.

As journalist Peter Elkind wrote in Fortune, “EB-5 fundraising is a messy process, more like pitching vacation timeshares than any normal form of deal finance.”

The potential for profits fuels misleading marketing. In three rounds of Atlantic Yards EB-5 financing, potential investors were fed praise from public officials for the overall project, even though the EB-5 investment would go to a subset of the project. (After I reported how promoters used a vague quote from Assistant Secretary of State Charles Rivkin purportedly in support of Atlantic Yards, the U.S. State Department successfully complained.)

No cost to taxpayers — really?

Second, if EB-5 represents no direct cost to taxpayers, that ignores “opportunity cost” — that is, the benefits the public could get from an alternative policy.

One of the oddities about the EB-5 program is that the U.S. government is giving out the green cards, but the entrepreneur who puts together the investment gets the money. This scheme seems inefficient and open to corruption. If our government really believes that it is a good idea to sell green cards, maybe we should drop the pretense that this is a job creation program. It might be more efficient to have the money go directly to the U.S. Treasury and reduce the deficit by billions of dollars a year. In fact, the U.S. government could auction off these green cards and perhaps raise even more money.

If such reforms were adopted, however, EB-5 would not have such vocal local backers, nor such furious lobbying. As the Washington Post said in an astute editorial, EB-5 represents “corporate welfare” for certain businesses. (A letter in response, naturally, defended “a program that costs taxpayers nothing.”)

Blatant gerrymandering may be fixed

The reform bill (since revised) authored by Sen. Judiciary Committee Chairman Chuck Grassley (R-Iowa) and ranking Democrat Leahy would, among other things, reauthorize for five years the regional center program, in which immigrant investor funds are pooled and then loaned to a local project, usually in “targeted employment areas.” 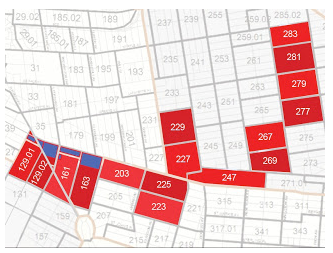 The blue shaded area constitutes the project site. The red constitutes the census tracts that were used to calculate the targeted employment area. Map by Abby Weissman for Atlantic Yards/Pacific Park Report.

More recently, the Wall Street Journal explained how the targeted employment area for a luxury tower in the Hudson Yards site west of midtown Manhattan was creatively connected to a housing project in West Harlem where unemployment is high. New York State officials have every incentive to draw such targeted employment areas, thus attracting cheap EB-5 capital to the state rather than let it go elsewhere. (An online consultancy, Real Estate Incentives Identified, even offers a handy gerrymandering tool.)

As the Wall Street Journal explained, most current EB-5 beneficiaries accept the Grassley-Leahy compromise, which would limit gerrymandering and thus help projects in the Senators’ rural states, but the developer behind Hudson Yards wants to keep the status quo. The recent revision is somewhat less restrictive. In a modest reform, the new legislation mandates that one of the 10 required jobs be a direct job, validated with a head count. The major EB-5 trade group, Invest In the USA, initially resisted that, but apparently now accepts it.

With Atlantic Yards, for example, the number of jobs generated by the first round of EB-5 funding, $228 million, were calculated based not on that sum but on a purported $1.4 billion “project,” including the already-funded Barclays Center arena.

In other words, the immigrant investors got credit for jobs financed by public subsidies and government-authorized tax-free bonds, funding that was already in place, not leveraged by the EB-5 investment.

If that sounds strange, the EB-5 gold rush gets even more bizarre. The two most recent rounds of EB-5 funding for Atlantic Yards, since renamed Pacific Park Brooklyn, were launched on behalf not just of initial developer Forest City Ratner, but its new 70 percent partner in a joint venture, the Greenland Group.

Greenland is owned and controlled by the government of Shanghai. The resulting scenario sounds like something out of the satirical publication The Onion, “a Chinese government profits by marketing U.S. green cards to Chinese immigrant investors.”

Shouldn’t that be enough to rethink EB-5?